Bob Lasher and Bob Wagner are longtime members of Great Autos of Yesteryear, one of the largest auto clubs in California. They, and their classic cars, live on a mountain top in Jamul, east of San Diego. This is the first of a series featuring the fabulous cars in their collection. Just click on any picture for an enlarged view.

When an antique car buff accumulates several vehicles, it seems only natural for one particular car to end up as the apple of his eye. Our 1949 Crown Imperial has long been, and probably always will be, this teacher's pet (Bob L. speaking). I consider this the crown jewel (living up to its name) of our modest collection.

For as far back as I can remember, a long sleek, black limousine was my dream car. I used to spend hours drawing limousines with exaggerated noses, stretched midriffs, and a rear end that wouldn't stop. Little did I know that one day I would find myself the proud owner of such a black beauty, one that obviously had felt years of kid-glove tender care and appreciation.

Chrysler entered the automotive scene in 1924 with an extensive line of 17 models in three series. The highest priced was the Imperial and the deluxe model was the Crown. However, that name disappeared after only two years. and through 1939 a "standard" Imperial was made along with a custom.

In 1940 that all changed. The only car offered was a Crown Imperial, a long 145 inch wheelbase eight-passenger model with or without a divider window. The body was a stretched sedan and was shared with other long wheelbase models.

Chrysler restyled all their cars for 1949 with all new sheet metal. Not one body piece is carried over from 1948. Mechanically, little changed, a notable exception being the four wheel self-energizing disc brakes used only on this Crown Imperial. The system was made by a manufacturer of aircraft landing gear, and adapted from an existing design. At first glance, the body looks like a stretched sedan (and the lesser 6-cylinder MOPAR limos are), but this model has unique doors, fenders, bumpers, taillights, wheels that are larger than any other model. Inside, all the rear compartment trim is nickel plated and all the hardware and panels are special. It's hard to believe all the special parts created for a production run of only ninety cars!! Only a fraction of the special parts carry forward to the 1950 and later versions.

These cars were shipped in prime to Derham in Philadelphia who did the interior and paint. All MOPARs of this period are enameled except this model which is lacquered. Now, 44 years and 40,000 miles later, the car stands untouched from new.

Only three dealers handled the Crown Imperials (New York, Washington, and Los Angeles), and no literature or advertising was produced. They did print an owner's manual for this model which was missing from our car, but we found one at Hershey the day we came to pick up the car (see below).

The car was delivered new to the Moroccan Embassy in Washington. They sold it about 1960 (with 24,000 miles of use) to a museum, which went out of business in 1972 when it passed to a Pittsburgh collector. He became ill and advertised it in 1984. Having seen it at a show earlier that year, we made a deal over the phone, and he agreed to deliver it to us at Hershey.

On our way home to Vermont, we stopped overnight with friends in New York City. Not wanting to leave it on the street, we searched for a parking garage and were turned down by several as they did not want to deal with its size or accept that liability. Finally, it found a berth in the Lincoln Center of Performing Arts complex at what seemed like an outrageous fee of $24.00 for 12 hours!

We hope that you enjoy this look at one of America's finest cars, presented just as it was over fifty years ago. Pictures cannot convey the quality of materials, fit, and finish that was bestowed on a truly custom vehicle of this era. It is indeed a living room on wheels. 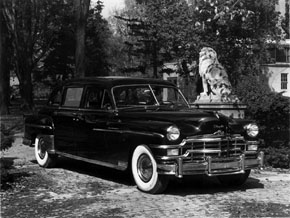 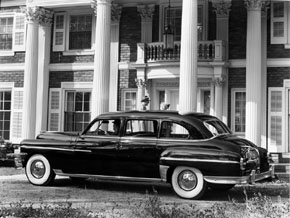 The rear wheels are five inches further apart to allow for a wider back seat. In order to limit the overall width of the car. special rear fenders have a recess to accept the forward sweep of the bumper. This is the only year with the bumpers extending to the wheel cutouts. Taillights are special to this mode

The side view mirror bases blend with the chrome molding under the windows. Other models have a single mirror mounted lower on the door. The concave side moldings are not used elsewhere. The front door lock key also operates the ignition, but the rear door is a different key. The divider window can be controlled only from the rear compartment, and the chauffeur can only raise, but not lower, the rear windows with his buttons. This key/window arrangement limits access to the passenger compartment. (So much for the trustworthiness of the hired help!) 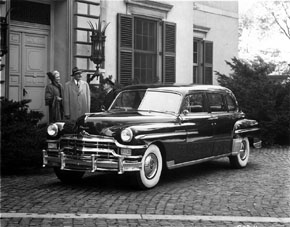 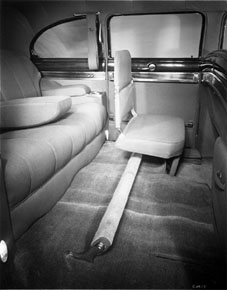 The occasional seats are unique, with a two-piece back. They fold flush into a recess in the front seat. The carpet is Mosstread, made by a small New York City shop. All back compartment trim is solid brass, nickel plated (thought to look more elegant than the traditional chrome). Note the hydraulic window controls under the rear window. Even the quarter windows are also powered, making for a total of 7 automatic windows.

The divider window fits snugly against the headliner which has a seal behind it. With the window up, it is nearly impossible to hear voices back and forth. The clock is an 8-day movement left over from WW II bomber planes. Also visible is one of three overhead lights. 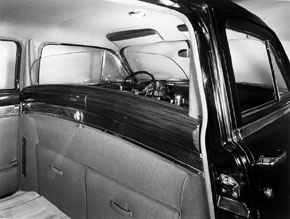 The chauffeur's compartment is finished in black leather, rubber floor mats, and chrome trim. The black steering wheel is another special item unique to this model. Note that his door panel (below the window) is black leather, whereas those in the rear are wood-grained.

Two release buttons in the rear bumper guards allow the center section to hinge down. This allows access to a door below the trunk lid. Inside is the spare tire, jack, and other tools. This special arrangement also avoids any necessity for the chauffeur to enterthe trunk compartment! 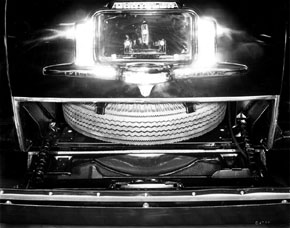